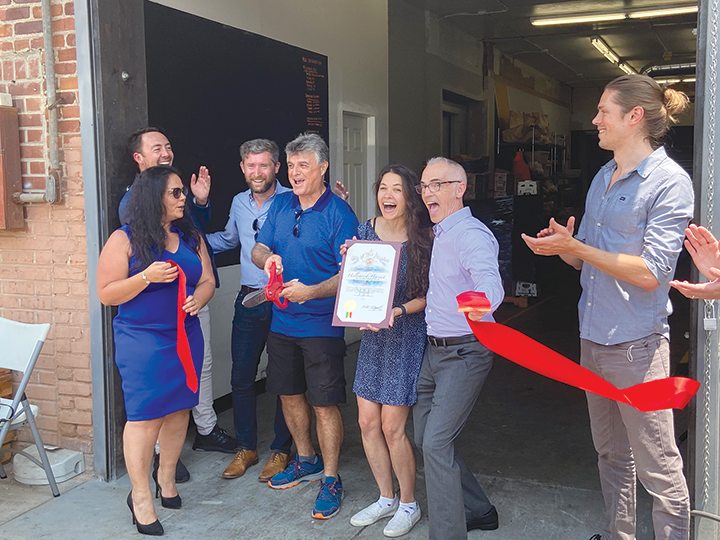 A grassroots nonprofit formed in 2020 by the Central Hollywood Neighborhood Council to ensure homebound seniors received groceries during the pandemic has expanded to offer food to more people.

Hollywood Harvest is now operating in a space at 1235 Vine St. in partnership with the Hollywood Food Coalition. The coalition uses the site to store food and distribute it to other nonprofits, which in turn gives the food to their clients. Volunteers deliver the food to homebound seniors.

“Hollywood Harvest exemplifies the importance of collaboration when there are parties of inspired mutual interests. There is nothing more important than helping people in need with their food insecurities as we slowly emerge from the pandemic,” O’Farrell said. “We will be here to support this incredible organization.”

Hollywood Harvest started in late March 2020 after stay at home orders were implemented. Central Hollywood Neighborhood Council President Elvina Beck, Vice President Ferris Wehbe and Board Member Louis Abramson started the effort to ensure seniors received enough food to eat. Abramson identified seniors who potentially needed help using voter rolls that the neighborhood council had previously purchased for conducting outreach. Within weeks, the volunteers were distributing groceries to nearly 400 seniors, and the program continued to expand over the following months. O’Farrell’s office contributed $5,000 to help get the effort off the ground and volunteered last spring by assembling packages of groceries.

He said on July 15 that his office will be working with Hollywood Harvest to have a loading zone created near the new building to assist operations.

Abramson said with the new space, organizers can eventually supply food for more than 1,000 people. The Hollywood Food Coalition receives food donated from stores, restaurants and individuals, including fresh produce, breads and desserts, and many pre-packaged meals. The Hollywood Food Coalition distributes food to nonprofits such as The Center, which serves unhoused individuals in Hollywood, as well as the Downtown Women’s Center, Black Women Lead and L.A. Mas. Through the partnership, Hollywood Harvest will also receive food for distribution.

Wehbe, who operates the Hollywood Schoolhouse on McCadden Place and donated the space for initial operations in 2020 when stay at home orders began, said the new building will allow Hollywood Harvest to flourish.

“When the pandemic took place, we sprang into action, and without hesitation, we invested our time and resources in organizing this service for our community,” Wehbe said. “Hollywood is a community that cares. This didn’t just happen overnight. We have been working together in Hollywood for years.”

Other partners in the effort include the Hollywood Chamber of Commerce, which helps coordinate food donations from local businesses and restaurants. Cedars-Sinai Medical Center donated a walk-in freezer for use at the new facility on Vine Street. The Post Group, which owns the building, donated the space for use as a food distribution site.

“When they approached me, I was more than happy to do my part to assist this exceptional organization extend its services to serve those community members most in need,” property owner Matt Cooper, of the Post Group, said.